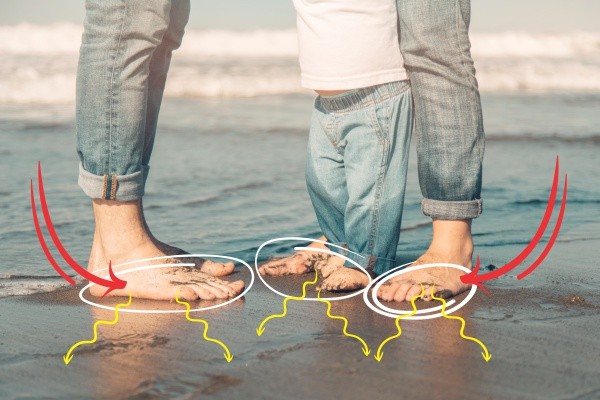 The Extraordinary Benefits of Grounding in Physical and Mental Health according to research!

Our daily lives are full of information, essential and meaningless, which concern various situations, so we may not give due importance to the phenomenon of “grounding”, in terms of its scientific documentation. And yet! There is a study conducted by a team of doctors with very interesting results.

“Grounding” is nothing more than our direct physical contact with the earth, either walking barefoot or lying on the ground. It may also refer to the use of conductive mats or shoes that allow electrons to pass from the earth to the human body.

What are the benefits of grounding?

The concept of grounding benefits for mental and physical health is based on the 19th century “return to nature” movement in Germany. However, as with many similar movements in the modern world, much of the public does not see these perceptions “with a friendly eye”. Yet, something begins to change …

Let’s look at some popular benefits of grounding:

Is there any evidence?

In 2015, Chevalier et al. completed a study with people who suffered from sleep disorders and chronic muscle and joint pain for at least 6 months. The subjects were divided into two groups: the “test group” and the “control group”. Both groups received conductive layers of carbon to sleep on. The “test group” placed the mattresses directly on the ground, while the “control group” placed the mattresses on a patch, which was on the ground.

Sinatra, Oschman, Chevalier, and Sinatra, after studies, concluded that grounding had significant health benefits. After reviewing the results, the researchers concluded that the benefits are related to the electric fields of the human body.

“According to grounding studies to date, multiple benefits are rapidly being established based on the extensive uptake and use of electrons that the body receives from Earth. The findings, among the substantiated results, include (1) fighting inflammation and pain, (2) improved blood flow and reduced blood viscosity, (3) reduced stress, (4) better sleep, (5) improved energy, and (6) improved and accelerated wound healing. “

How does grounding work?

According to the researchers, the human body can be perceived as a bio-electrical organism. It is therefore regulated by processes involving mainly electrons. Electrons allow atoms to bond with other atoms and form molecules.

You may have heard of free radicals. Free radicals are thought to be responsible for aging and disease. The researchers report that free radicals detect electrons, which they detach from molecules as part of a process of destroying damaged cells, which are replaced by new cells. This helps to create “oxidative stress”. However, here the aging process intervenes! Electrons from the earth can neutralize electron-seeking free radicals.

Researchers report that the majority of people today suffer from “electron deficiency”. This is because we do not have sufficient contact with the earth due to the use of footwear and its removal from nature.

How can we improve our health with grounding?

I wish we could be barefoot for 30 to 40 minutes a day. If you do not have a garden or park near you or other areas where it is safe and clean to walk barefoot, then you can buy conductive shoes.

A good suggestion is to offer the possibility of a grounding session in a clinical setting for 30 minutes or 1 hour, using conductive materials.

It is a fact that more and more people could benefit from earthing if they could buy earthing products such as earthing mats. Look for specialist suppliers online and consult them – they will help you make safe decisions.

Be sure to refer to the literature referenced in this article, so that it is the team of specific scientists involved in these studies.

Do not ignore grounding…

The potential grounding benefits described in this article are more than interesting. The need to treat our health differently is now very strong. The limitations and even the risks of relying on a biochemical perspective on human health tend to become clearer. Awareness of the negative effects of drugs on humans is a fact, while pharmacological treatment for psychological conditions is already considered a very controversial issue.

Indeed, we are beginning to notice that too many people are taking drugs without clear indications of their effectiveness. In addition, they can have side effects that worsen rather than improve our state of health.

Twenty years ago, our society began regularly prescribing psychiatric drugs to children and adolescents, and now one in fifteen Americans enters adulthood with a “serious mental illness.” This is proof of the dramatic fact that conventional medicines cause more problems and side effects than the issues they are called upon to regulate.

“Medication for children and young people is now a daily occurrence and has launched a generation of people who will experience the course of a lifelong disease.” (Whittaker, 2010)

At the same time, it is clear that grounding offers significant benefits without harmful side effects and is available for free.

Perhaps for this reason few scientists have investigated this issue. More and more people are beginning to realize that the modern model of healthcare and scientific research is hiding the truth about our health instead of highlighting it.

Too often, researchers are not able to get funding for their studies if the latter is not going to be profitable. This means that a lot of high-quality research on natural and cost-effective solutions to improve our health is not launched for reasons of expediency.

Overall, these findings are another reason to re-evaluate the way of life in modern societies. Once again, we find that a lack of connection to nature can harm us and that sleeping in high-rise buildings and working in apartment buildings on a daily basis can harm human health.

How long will we continue to ignore these findings, moving even further away from nature in the name of “progress” or, in other words, profit?

So, let’s be grounded, it will only do us good!