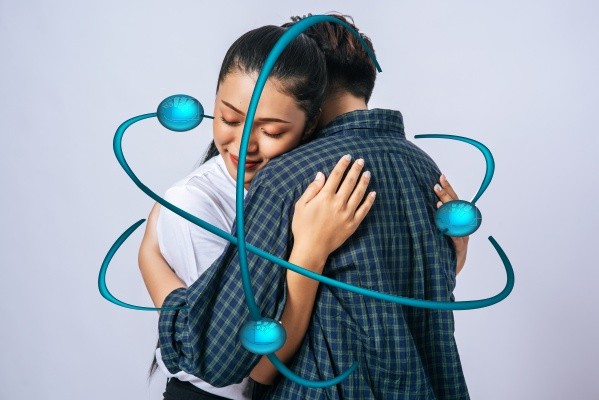 Did you know that the healing power of 1 hug, besides a gentle gesture, is also a means of protecting our health and that it protects against … viruses?

According to a study published in the journal Psychological Science,

those who lack tender hugs from their loved ones are more likely to get sick and even have more severe symptoms of the flu or cold.

According to the relevant report of TIME magazine,

the researchers from Carnegie Mellon University in the USA came to this paradoxical conclusion after studying the relationship between cuddling – as a sign of support from the social environment – with the flu.

Previous studies have suggested that strong social bonds protect against stress, anxiety, and depression, so researchers wanted to see if it is also a shield against non-mental illness.

For two weeks, they monitored 400 volunteers on a daily basis, evaluating the social support they enjoy from their immediate environment.

They were asked daily if anyone hugged them or if they experienced tensions and conflicts. They were also given the flu or cold virus with the help of special drops and placed in quarantine for a week in a hotel.

It should be noted that all volunteers were reimbursed for their participation in the study, according to one of the study’s authors, Sheldon Cohen, a professor of psychology at Carnegie Mellon.

At the end of the experiment, it was found that those who became more seriously ill were those who had been largely deprived of a hug and those who felt that they did not enjoy the desired support from their social environment.

The positive effect of a hug

A hug has a positive effect on the psychological state of the person and fights stress, with the result that the immune system works better and repels pathogenic invaders more effectively.

As for the ideal “dosage” needed to avoid getting sick, Cohen argues that “just one hug a day is enough.”

World Hug Day on January 21 was established in 1986 with the aim of encouraging us to express our feelings in public and to show tenderness to the people we love.